Maia, the great Corgi Warlock, sets out on a quest to defeat the EVIL BUNNY KING and his army of undead minions. Based on a true story*, follow the exploits of Maia as she battles nefarious creatures of the BUNNY ARMY with her magic.

If Maia can't do it alone, she can team up in local co-op with her pals, The Magic Pug, The Prophet Pig-J, and the Deadly Fish Mage. With their powers combined not even the dreaded Bunny King himself will stand in their path... Or so they hope.

CORGI WARLOCK also features a 1-4 player vs. Battle Mode, for when you need to determine who does the dishes or if a Pug really is better than a Corgi.

The game is local co-op and local versus multiplayer.

About the creator:
Xander's Corgi Arcade is a one man shop, started by a former PIXAR, Dreamworks, and Sony animator, who decided to take a break and work on his own games for a while. His super amazing corgi, Maia, was the inspiration for it. 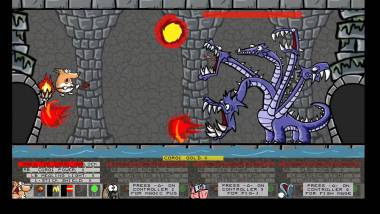